Addis Abeba, March 30/2018 – Journalist Temesgen Desalegn, who has been rearrested last sunday along with ten other here in the capital Addis Abeba, is admitted to Zewditu hospital due to sever back pain he developed during his jail time in recent past, according to family members.

“Temesgen did not have the break he needed to recover from the back pain he developed when he was in Ziway federal prison and was following with treatments after his release,” a family member who was on her way to the hospital told Addis Standard. “I don’t know what he did to deserve this.”

Ten others who are detained with him under the state of emergency are all kept in inside the Gotera police station in  “inhuman” condition where around 200 detainees “are packed in a 5 by 8 meter room divided in three sections,” according to a note written and sent out by journalist Eskinder Nega, who was recently released  along with hundreds other political prisoners. A hostile police officer at the prison told Addis Standard’s reporter to “not show up again” and “direct all queries to the command post authorities.”

During the last weekend, more than 30 people have been detained in Addis Abeba, Bahir Dar, the capital of the Amhara regional state, and in cities in east and west Hararghe zone of the Oromia regional state, among others. The detainees included university professors, former prisoners who were recently released, religious figures as well as local administrators.

Journalist Temesgen is among the 11 individuals detained on Sunday March 25 during a lunch party organized by his mother to celebrate the release his colleagues and friends. Others included journalists Zelalem Workagegnehu, and Eskendir Nega and opposition politicians Andualem Aragie and Woynishet Molla. The list also includes bloggers and rights activists Mahlet Fantahun and Befekadu Hailu of the zone9 blogging collective, as well as Yidnekachew Addis, Sintayehu Chekol, Addisu Getaneh and Tefera Tesfaye. 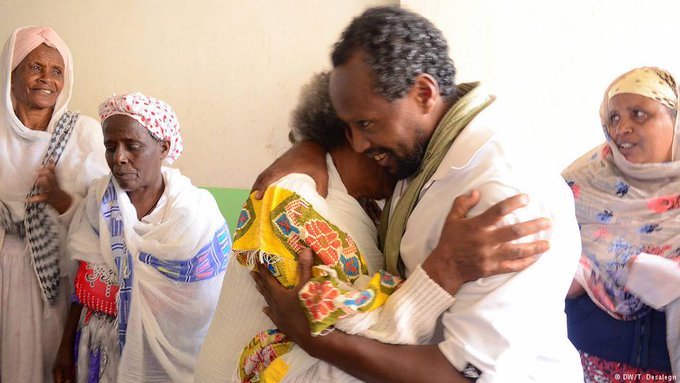 The weekend detainees also included a group of 19 academicians and journalists who remained in prison in Bahir Dar. According to information from family members, the 19 are still kept without being brought to court. But unlike the group held in Addis Abeba, they are kept in relatively better condition and do get visits from family members and lawyers.

41 people are talking about this

Yesterday, Ethiopian netizens once again took to social media using the hashtag #FreeAllPoliticalPrisoners to highlight the conditions the detainees are held in and to demand their release.

“#FreeAllPoliticalPrisoners” by @addisstandard
As new round of crackdown by army in #Ethiopia saw more than 30 academicians, bloogers, journalists, & opposition politicians jailed, netizens once again took to social media to demand their release https://twitter.com/i/moments/979622386495574016 …

As new round of crackdown by army in Ethiopia saw more than 30 academicians, bloogers, journalists, & opposition politicians jailed, Ethiopian netizens once again took to social media to demand the…