Addis Standard has learnt that the meeting comes amidst increasing talks among various high level officials that the government was likely to declare a five-months State of Emergency (SOE) in its efforts to contain the spread of COVID-19.

Prime Minister Abiy Ahmed has met and held two rounds of discussions with various representatives of opposition political parties on April 05 and 07. However, no detail of the meeting was made available for the public except information from PM Abiy Ahmed’s twitter page. “Following my meeting this afternoon with the second group of competing party leaders, I would like to appreciate the good will shown to collaboratively fight the impact of COVID-19 and the support for strong government measures. Such a spirit of cooperation will do right by our citizens in these times and in others to take Ethiopia onto the path of prosperity,” the Prime Minister said after his second round meeting with representatives of opposition parties.

According to information obtained by Addis Standard from three participants of different parties, the Prime Minister has discussed the possibilities of declaring a state of emergency which will last for five months to combat the Coronavirus. Questions regarding the scoop of its implantation and the lack of clarity in the draft SoE were raised by some representatives of opposition political parties to which the Prime Minister is said to have responded with assurances that the SoE was solely aimed at contain the virus. 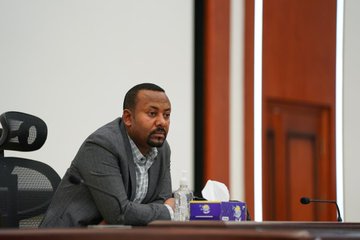 Questions were also raised on the constitutional implication of declaring a state of emergency as the term for the national parliament comes to an end three months from now, before the end of a five-months state of emergency. PM Abiy indicated that further deliberations will be held to mitigate the constitutional implications and that the focus should for now be on the fight against COVID-19, Addis Standard has learnt. AS