Prisoners in La Modelo prison on Sunday after the riot demanding health measures against the spread of Covid-19. © REUTERS/Leonardo Munoz
At least 23 people have died and dozens more are injured following a riot over coronavirus in La Modelo prison in the Colombian capital Bogota, the country’s justice ministry has said.

Seven prison guards were injured during the outbreak of violence on Saturday night, which took place as prisoner protests over sanitary conditions erupted into bloodshed. Two of the guards are in a critical condition, Justice Minister Margarita Cabello said on Sunday.

A protest against sanitary conditions in #LaModelo prison in #Bogota erupted into bloodshed and massive escape attempt, during which at least 23 people have died, and over 80 were injured 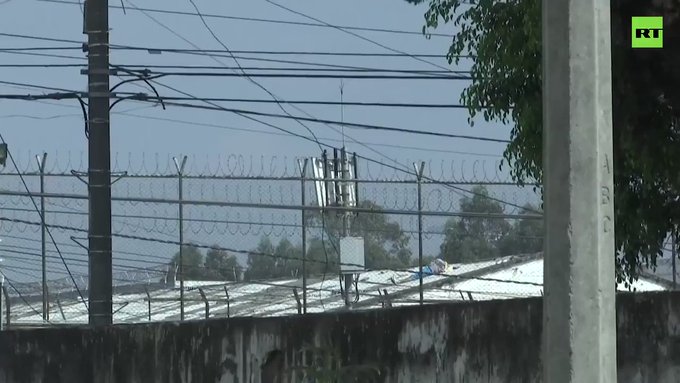 Cabello added that the riot was a massive escape attempt and similar riots were also seen in several other penitentiary centers across the country.

La Modelo prison was the scene of the worst of the violence, with graphic videos circulating on social media showing prisoners burning objects and a prison guard on the ground having apparently suffered serious injuries.

The Public Defender’s Office shared video footage of operatives trying to quell the riot by seeking to establish a dialogue between the prisoners and the guards.

The office is calling on the government to decree a prison emergency which would allow the temporary release of certain categories of prisoners.

Cabello said that no prisoners escaped during the unrest. “There is not any sanitary problem that would have caused this plan and these riots. There is not one infection nor any prisoner or custodial or administrative staffer who has coronavirus,” the justice minister said.

The South American country is imposing a nationwide lockdown on Tuesday night in a bid to tackle the spread of the Covid-19 illness. A total of 231 people are confirmed as having contracted the disease in the country and two have died.

Protests spread in China as anger mounts over ‘zero-COVID’

Protests spread in China as anger mounts over ‘zero-COVID’

Use of death penalty declines in Africa

Somalia fights back against al-Shabab attack on education sector

Portugal can count on Ronaldo in Qatar, Silva says

Exclusive: Tesla has considered exporting EVs from Shanghai to the U.S.,...

Is the cost of living protest movement about to erupt?

Can NATO allies arm both Ukraine and themselves?