Iraq has been rocked by days of protests, as thousands of mostly young men have been demonstrating in different parts of the country against corruption, unemployment and poor public services.

Tensions have been exacerbated by a near-total internet blackout as the authorities seek to prevent protesters from communicating with each other or posting footage of the chaotic demonstrations online.

The mostly leaderless demonstrations are the biggest challenge yet to the one-year government of Prime Minister Adel Abdul Mahdi, who has imposed curfews in the capital, Baghdad, and other cities to try to stop the protests gathering steam.

Here are the latest updates:

“That emergency session was supposed to begin at 1pm (10:00 GMT) local time, it’s now just after 4pm local time (13:00 GMT) and they haven’t been able to get enough MPs to begin that session,” Khan said.

“It hasn’t been cancelled as of yet, however it’s unlikely the session will take place according to politicians that we have spoken to.”

The death toll from mass protests in Baghdad and cities across southern Iraq rose to 93 as the unrest entered its fifth day, parliament’s human rights commission said.

Nearly 4,000 people have also been injured. It was not immediately clear whether the latest deaths were from Friday’s huge protests or fresh demonstrations on Saturday.

Despite the lifting of the government-imposed curfew, riot police have blocked Baghdad’s Tahrir Square, the focal point of protests, local news agencies said.

Shoppers trickled back onto the streets to buy vegetables and other perishable goods the price of which had doubled since the protests began.

Municipal street cleaners set about clearing the detritus of the four days of running clashes between protesters and security forces, which has seen breeze blocks and burning tyres strewn across major thoroughfares.

An onlooker who ventured out, Abu Salah, 70, was not convinced the protests were over.

“If living conditions don’t improve, the protesters will be back,” he told AFP.

The Iraqi Human Rights Commission has reported that the death toll has increased to 73, including six members of the security forces, with more than 3,000 others injured.

A total of 540 demonstrators have been arrested, of whom nearly 200 remain in custody, the commission added.

Al Jazeera’s Imran Khan, reporting after the curfew was lifted from Baghdad on Saturday, said that while there are still protesters out in the streets, they are not in the numbers that the previous days witnessed.

“There was an incredible amount of criticism from all aspects of Iraqi society when the curfew was brought into place,” he said, speaking from the capital.

“It was never a long-term, short-term or even medium-term solution to Iraq’s crisis. The government had little choice but to actually lift it so they can get Baghdad moving.”

It was not immediately clear if curfews put in place in other cities throughout Iraq over the ongoing unrest would also be lifted.

Shia leader Muqtada al-Sadr, whose coalition had won the largest number of seats in last year’s elections, called for the government to resign and for a snap election to be held, a statement from his office said.

The fresh poll should be monitored by international experts, the statement added.

Al-Sadr had earlier urged legislators to suspend their parliamentary membership and boycott sessions until the government responds to the protesters’ demands.

The International Committee of the Red Cross (ICRC) called on security forces and protesters to exercise restraint.

“The use of firearms by security forces must be a measure of last resort and only to protect against an imminent threat to life,” Katharina Ritz, the ICRC’s head of delegation in Iraq, said in a Twitter post.

“We call on all for restraint,” she added.

I am concerned by the growing number of casualties at the ongoing protests across #Iraq.

The use of firearms by security forces must be a measure of last resort and only to protect against an imminent threat to life.

As violent protests across #Iraq escalate, ICRC calls on all for restraint as it monitors developments on the ground. 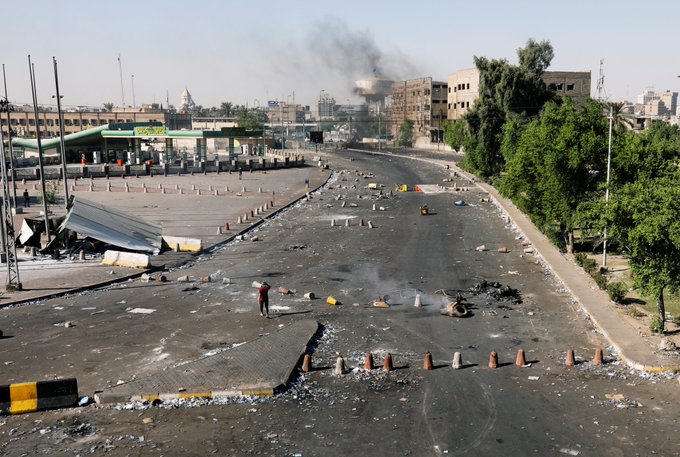 The death toll since protests began on Tuesday had reached 65, the Reuters news agency reported, citing security and medical sources. The vast majority of the deaths occurred in the last 24 hours as violence accelerated amid continued demonstrations.

The Associated Press news agency meanwhile put the death toll at 53 after medical and security officials said 11 protesters were killed during protests in Baghdad.

Al Jazeera could not independently verify either set of figures.

“He [al-Halbousi] has taken the side of the protesters, he’s saying the government has failed and needs to put in reforms right now,” Khan said.

“There seems to be a lot of anger towards the government, but it’s also coming not just from the protesters but from the parliament itself,” Khan added. “But this government is only a year old and these problems are a lot older than that.”

Khan also said authorities’ appeals for calm appeared to have failed, with protesters out on the streets of the capital in defiance of a government-enforced curfew.

A statement said two of those killed were members of the security forces and the other two were civilians.

The killings bring the death toll since protests began on Tuesday to 44, including six security forces, according to police and medical sources.

Protesters stormed the provincial council in Diwaniya in southern Iraq, according to a police officer.

Dozens of protesters were reportedly wounded by gunfire and police forces were also injured after demonstrators threw stones at them.

The police officer said: “There are unconfirmed reports of deaths among the demonstrators as a result of the clashes.”

Shia leader al-Sadr urged legislators to suspend their parliamentary membership and boycott sessions until the government responds to the protesters’ demands.

“Hurry to suspend your membership without delay,” he said in a statement issued before a parliamentary session on Saturday.

Al Jazeera’s Khan, reporting from Baghdad, said “there is already controversy over what’s going to be discussion” at the emergency session and “what impact it might have on the protesters”.

Al Jazeera’s Khan said the curfew was having a “huge impact” on residents’ lives.

Khan cited a statement by the Iraqi Human Rights Commission, which said the prices of food and fuel were rising due to the measures.

“It’s asking the Iraqi government to try and lift some of the restrictions or at least to try and send food trucks to areas where there is a curfew,” Khan said.

“The curfew is being adhered to by most sections of society apart from protesters who still gather in parts of Baghdad,” he added.

“What we’ve seen so far is them gathering in different parts of the city, but they’re all looking towards the focal point, which is Tahrir Square in central Baghdad and that’s where they’ll march. We’re expecting that after dark, we will see more of the scenes we’ve been seeing over the last couple of days.”

Nechirvan Barzani, president of Iraq’s semi-autonomous Kurdish region, addressed the unrest, saying the situation in Baghdad was being monitored.

In a statement, Barzani said peaceful demonstrations are a constitutional right but should not lead to chaos and disorder.

Iraq’s dollar-denominated sovereign debt fell 1.2 cents to a four-month low amid the unrest in the country.

The 2028 issue dropped to as little as 95.14 cents – the lowest level in four months, according to data from Refinitiv. The bonds have fallen more than two cents since the start of the week.

Kuwait and Bahrain called on their citizens to avoid trips to Iraq due to the protests and advised those who are there to leave the country immediately.

The United Nations called on Iraq to rapidly and transparently investigate force used by anti-riot police in clashes with protesters that have left dozens dead.

“We call on the Iraqi government to allow people to freely exercise their rights to freedom of expression and peaceful assembly,” Marta Hurtado, spokeswoman for the UN rights office, told journalists in Geneva.

“We are worried by reports that security forces have used live ammunition and rubber bullets in some areas, and have also fired tear gas canisters directly at protesters,” Hurtado said, insisting that in dealing with demonstrations, “the use of force should be exceptional”.

“Any use of force must comply with applicable international human rights norms and standards,” she said, stressing that firearms should never be used “except as a last resort to protect against an imminent threat of death or serious injury.”

“All incidents in which the actions of security forces have resulted in death and injury should be promptly, independently and transparently investigated,” she said.

He has called on the Iraqi government to heed the protesters’ demands “before it is too late”.

In a letter read out by his representative Ahmed al-Safi during a sermon in the holy city of Kerbala, Sistani described the deaths from the protests as “sorrowful”, and maintained that the government has not “achieved anything on the ground”.

“Lawmakers hold the biggest responsibility for what is happening,” Sistani said.

He also said the government “must do what it can to improve public services, find work for the unemployed, end clientelism, deal with the corruption issue and send those implicated in it to prison”.

In Friday Prayer sermon, Ayatollah Sistani condemns attacks on peaceful protesters and security forces. He hopes everyone understands the dangerous consequences of violence and criticises the government, parliament and judiciary for failing to deliver real reform. #IraqProtests

30 people are talking about this
Death toll rises to 44: police, security sources

The death toll from three days of anti-government protests in Iraq climbed to 44, police and medical sources told Reuters.

The largest number of casualties occurred in the southern city of Nasiriya, where 18 people were killed, followed by the capital Baghdad where the death toll stood at 16, they said.

The protests, in which hundreds of people have also been injured, began over unemployment and poor services but have escalated into calls for a change of government and pose one of the country’s biggest security challenges in years.

Qatar urges citizens not to travel to Iraq

Qatar’s foreign ministry advised its citizens not to travel to Iraq and urged those already there to leave immediately in view of ongoing unrest.

Iraqi security forces opened fire on dozens of protesters gathering in Baghdad for a fourth day of demonstrations against corruption, unemployment and poor public services.

“These protesters have now been dispersed to neighbouring streets and there are running battles taking place,” said Al Jazeera’s Khan.

Abdul Mahdi said there was “no magic solution” to Iraq’s problems but pledged to work on laws granting poor families a basic income, provide alternative housing, and fight corruption.