Declaration of ISIL defeat in Syria and pulling out of troops angers top Republicans and surprises some foreign allies.

President Donald Trump has announced the withdrawal of all 2,000 US troops from Syria as he abruptly declared victory over ISIL in the country in a move that contradicted his own experts’ assessments and sparked surprise and anger among senior fellow Republicans who railed against it.

“We have defeated ISIS in Syria, my only reason for being there during the Trump presidency,” Trump said on Wednesday, referring to the armed group that once controlled vast areas of Syria and Iraq but is now confined to small pockets.

US officials said many details of the troop withdrawal had not yet been finalised, but they expect their country’s forces to be out by mid-January.

Washington began air raids in Syria in 2014, a year before US ground troops moved in to fight the Islamic State of Iraq and the Levant (ISIL, also known as ISIS) armed group and train Syrian rebels in the war-ravaged country.

Later on Wednesday, Trump suddenly declared their mission accomplished, posting a video on Twitter in which he said is “heartbreaking” to have to write letters and make calls to the loved ones of those killed in battle.

“Now it’s time for our troops to come back home,” said Trump, who has long stated a desire to bring soldiers based in Syria back to the United States. 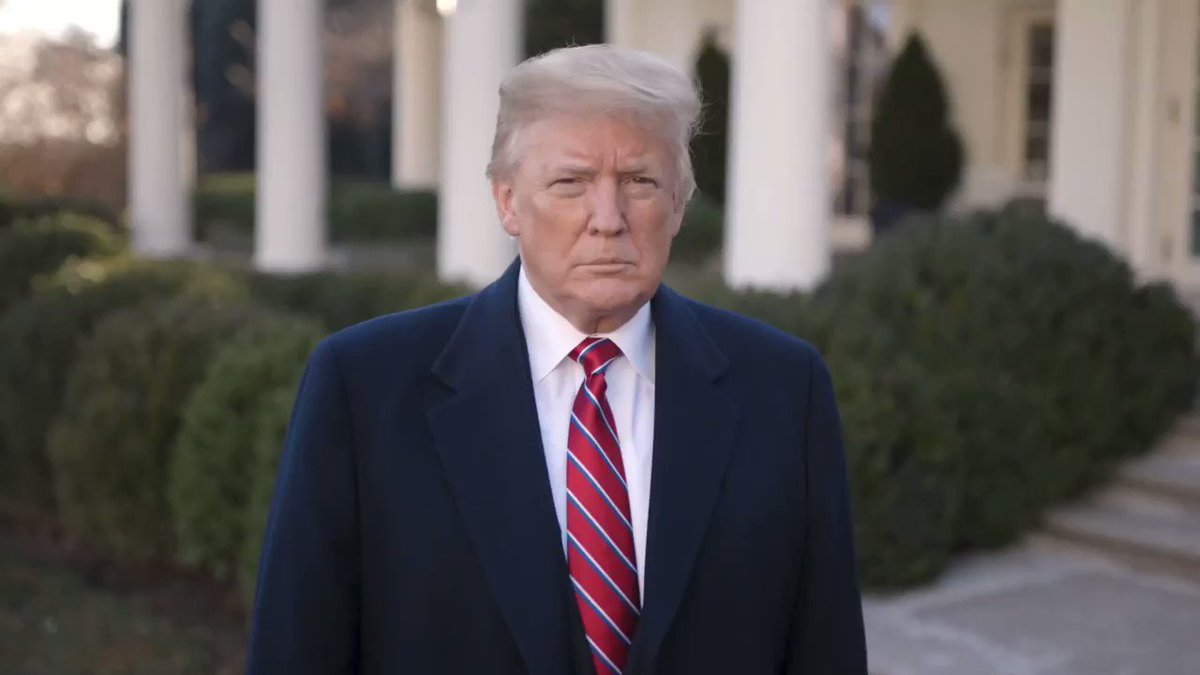 Trump’s decision immediately triggered demands from Congress, including senior Republicans, for more information and a formal briefing on the matter.

A senior administration official, speaking to reporters on condition of anonymity, said Trump made the unilateral decision based on his belief that US troops have no role in Syria beyond combatting ISIL.

The US president informed his Turkish counterpart, Recep Tayyip Erdogan, of his move in a telephone call, the official said, adding that Trump “made his own decision” and did not discuss the matter with Turkey’s leader.

Turkey, a NATO ally, has recently warned that it will launch combat operations across its southern border into northeastern Syria against an alliance of Kurdish and Arab groups known as the Syrian Democratic Forces, or SDF, who have been allied with the US in the battle against the ISIL.

The partnership with the SDF has outraged Ankara, which views the US-backed Kurdish People’s Protection Units (YPG) as an extension of an armed group fighting inside Turkey.

In recent days, Turkey again voiced frustration about what it says are delays in the implementation of a deal with the US to clear the YPG from the town of Manbij, located west of the Euphrates in YPG-controlled areas.

“They are also suggesting that Trump is doing this as a favour to Turkey – the reason he wants Turkey onside, perhaps, is to ease the pressure on Saudi Arabia, particularly over the death of Jamal Khashoggi,” said Fisher, referring to the October 2 murder of the Saudi journalist inside the kingdom’s consulate in the Turkish city of Istanbul.

Britain, meanwhile, said it strongly disagreed with Trump that ISIL had been defeated in Syria, while Israeli Prime Minister Benjamin Netanyahu said Israel would study the decision and would ensure its own security.

In Russia – a major ally of Syrian President Bashar al-Assad, along with Iran – TASS news agency quoted the foreign ministry as saying that withdrawing US troops from Syria created prospects for a political settlement.

Trump’s declaration of victory was far from unanimous and officials said US defence and military leaders were trying to dissuade him from ordering the withdrawal right up until the last minute.

News of a full withdrawal drew immediate criticism from some of Trump’s fellow Republicans, who said that leaving strengthened the hand of al-Assad allies, Russia and Iran.

Senator Lindsay Graham, typically a Trump backer, called the decision “a disaster in the making”. He added: “The biggest winners in this are ISIS and Iran.”

Marco Rubio, another Republican senator, called the move a “grave error” adding that Kurdish fighters will stop fighting ISIL when they had to confront Turkish troops crossing the border into Syria. “This is a bad idea because it goes against the fight against ISIS and potentially helps ISIS,” he said, warning it could trigger a broader conflict in the region.

“Now that the US has withdrawn or is going to withdraw from Syria, we have basically turned the country over to Russia and, to an even greater extent, Iran.”

“For the first time in my lifetime, we have a president with the courage to declare victory and bring our troops home,” he told reporters.

Bob Corker, the outgoing chairman of the Senate foreign relations committee, whose meeting with Trump on Wednesday was cancelled without explanation at the 11th hour, called the move “a terrible thing” for the US, its allies and SDF.

“I’ve never seen a decision like this since I’ve been here in 12 years,” he told reporters. “It’s hard to imagine that any president would wake up and make this kind of decision with this little communication, with this little preparation,” he said.

Trump’s decision also sparked calls by the SDF in Manbij for demonstrations against his move.

In late September, Trump heralded the sacrifices the Kurds had made in the fight against ISIS,

“We do get along great with the Kurds,” he told a press conference. “We’re trying to help them a lot. They fought with us. They died with us. They died. We lost tens of thousands of Kurds, died, fighting ISIS.”

Speaking to Al Jazeera, Lawrence Korb, a former assistant secretary of defence, said Trump’s decision sends a message that “we don’t stick with people, our friends. Without the Kurds and the Syrian Democratic Forces, we couldn’t have beaten ISIS, we couldn’t have taken back [the Syrian cities of] Kobane and Raqqa because we were not willing to commit all of those troops that were necessary.”

Military leaders have pushed back against a withdrawal for months, arguing that ISIL remains a threat and could regroup in Syria’s long-running war. US policy has been to keep troops in place until ISIL is eradicated.

Just last week, Brett McGurk, US special envoy to the anti-ISIL coalition, said US soldiers would remain in Syria even after ISIL was driven from its strongholds.

“I think it’s fair to say Americans will remain on the ground after the physical defeat of the caliphate, until we have the pieces in place to ensure that that defeat is enduring,” McGurk told reporters on December 11.

“Nobody is declaring a mission accomplished. Defeating a physical caliphate is one phase of a much longer-term campaign.”

Meanwhile, US Marine Corps General Joseph Dunford, chairman of the Joint Chiefs of Staff, cautioned earlier in December that the US had trained only about 20 percent of Syrian forces required to stabilise areas captured from ISIL.

Al Jazeera’s Fisher said: “There is concern certainly on Capitol Hill that Trump is acting a bit prematurely.”

“It’s just two months ago that John Bolton, his national security adviser, gave a speech in New York that US troops will stay in Syria as long as Iranian presence was outside their own borders – and that was a sign of the US policy in the region, that they were determined to confront Iran and certainly determined to stop Iran from gaining a bigger foothold inside Syria itself.”

ISIL declared its so-called “caliphate” in 2014 after seizing large swaths of Syria and Iraq. It established its de facto capital in the Syrian city of Raqqa.

According to US estimates, the group oversaw about 100,000 square kilometres of territory, with about eight million people under its control. It had estimated revenues of nearly $1bn a year.

McGurk said last week that the group was down to the last one percent of the territory it once held in its self-styled “caliphate”. The group has no remaining territory in Iraq.

Hajin, the group’s last major stronghold in Syria, is close to being seized by US-backed SDF forces.

After losing Hajin, ISIL will control a diminishing strip of territory along the eastern bank of the Euphrates. The group also controls some desert terrain west of the river in territory otherwise controlled by the Damascus government and its allies.

The complete withdrawal of US troops from Syria would still leave a sizeable US military presence in the region, including about 5,200 troops across the border in Iraq.

Much of the US campaign in Syria has been waged by fighter jets flying out of Qatar and other locations in the Middle East.

Still, US Secretary of Defense Jim Mattis and US State Department officials have long fretted about leaving Syria before a peace agreement can be reached to end that country’s brutal war, which has killed hundreds of thousands of people and displaced around half of the prewar population of about 22 million.

In April, Mattis said, “We do not want to simply pull out before the diplomats have won the peace. You win the fight – and then you win the peace.”

ISIL is also widely expected to revert to guerrilla tactics once it no longer holds territory. A US withdrawal could open Trump up to criticism if ISIL reemerged.

Trump has previously lambasted his predecessor, Barack Obama, for the withdrawal of US forces from Iraq that preceded an unravelling of the Iraqi armed forces. Iraqi forces collapsed in the face of ISIL’s advance into the country in 2014.

The Imperial Presidency Is Alive and Well,Don’t Mistake Impeachment for a Congressional Effort to Claw Back Power

The Second Day Consultative Workshop of the Woman in Politics...

A consultative Workshop for the development of Media Advocacy strategy Campaign...

The Imperial Presidency Is Alive and Well,Don’t Mistake Impeachment for a...

Forum Discussion of The Rights of The Media and The Role...

Bahati paid me Ksh.3,000 for a performance,’ reveals Peter Blessing

Suleiman Kore Stated bravely and oratory at the Follow Up Meeting...

The African Center for Economic Transformation (ACET) is an economic policy...